People have been talking about setting up a UK Sovereign Fund for years. However, there is still relatively little clamour to support this initiative and make it real.

Of course this is an old idea. Norway set up its Sovereign Wealth Fund back in 1969, with the aim of managing Norway’s oil resources over the long-term. Over the last ten years, the fund has delivered a return of 8.3%, or 36.5% in real terms after annual management charges and inflation. Source Forbes.

Much more recently in 2006, Australia set up a Future Fund which is performing well and is investing in a number of different areas including disability care, medical research and nation building.

The UK could very easily start a Sovereign Wealth Fund and it would be applauded by the majority of people in the country as long as its core principles were right and it was totally apolitical. It’s time we did. We are a small but highly inventive people. We shall become an increasingly small part of the future world and yet there is no reason for our creativity, originality and inspiration not to be captured, supported and indeed amplified through such a fund

We should set up our own “Future technology Fund”. It should invest in technologies that benefit large numbers of the future population. This should include the following:

Some of the amazing break throughs that are happening in health technology should be supported and ultimately be part of this Fund. There is too much incredible work that originates here in the UK but that is allowed to be commercialised elsewhere in the world. We need to ensure that the Fund can provide a commercially owned structure which ensures that value goes into future generations living in the UK.

The Fund should be controlled on the basis that no funds can be withdrawn for 10 years minimum and then only a maximum of 2.5% of the value of the fund in any one government as long as the total fund is still always higher than previously. It should be independently managed and separately monitored.

We should incentivise entrepreneurs to bequeath their companies and the assets of these companies to the state. We should do this by providing them with entrepreneurial tax relief on their output as long as at least 25% of the assets ultimately end up in the Fund. This would continue to build on the “innovation and entrepreneur friendly” tax structure that now exists in the UK and which is much envied across Europe.

We desperately need to rethink how we fund our future. This would be an important first step in that direction.

Why is every tree in London being pollarded within an inch of its life? 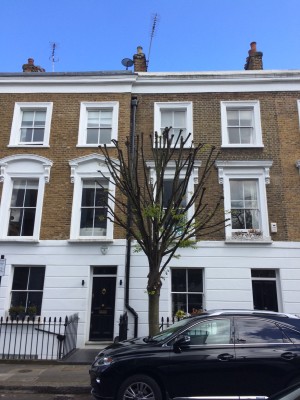 I know that tree pollarding has existed since the Middle Ages as a way of managing unruly trees and ensuring symmetry but it does seem as though the Councils are getting carried away with sawing off misbehaving limbs!

It’s a great irony too, that at a time when every Council is under pressure to maintain the level of trees in their areas and keep the place as “green” as possible that at the same time they are encouraging their contractors to strip every tree bare of anything that resembles greenery.

I suspect that much of it is blamed on Health and Safety regulations. Nothing must be a potential risk to a passing pedestrian. But surely you should be able to have some say on what happens beside your own property.

Why for example did they chop off the branches on one side of the tree outside of this house? If this is about symmetry then I am a little surprised.

Perhaps the Council argues that the general public demand it. They don’t want falling branches on their heads or leaves on their doorsteps. They don’t want to have to clear anything up or to have any obstruction to their fine views over the neighbours.

For me this is another example of modern day Puritanism. It’s a case of increasing intolerance. If there is anything out of place or potentially disruptive, then it must be neutered. The world around us must be controlled as much as possible. At a time of increasing unrest in much of the world and in so many aspects of life, from ISIS to synthetic drugs, then maybe it is some comfort for people to know that their trees are not going to fight back. Perhaps it is another example of how public life and government is so out of kilter with society.

Why should I care?

After all the British economy is now performing well, new jobs are being created, men and women are being encouraged to follow their passions, win their freedom from a boring 9-5 existence and create the business of their dreams. This is all good.

I have two problems with this hype

The first is that statistically most entrepreneurs will fail and often with considerable hardship. This is very rarely highlighted in any government or media information

The second is that creating small lifestyle businesses and millions of little start-ups is not going to revolutionise our economy.

My plea is that there is a more balanced debate about entrepreneurialism.

So let’s take these issues one at a time.

The media is turning entrepreneurialism into a commodity. They imply that anyone can become a successful millionaire entrepreneur.

It’s true that anyone can have an idea and become an entrepreneur. It’s easy to start a company, get a bank account, and create a website.  But that doesn’t make you a succcessful entrepreneur. If it did then there would be a lot more millionaires. The Internet has made it incredibly easy for anyone with an idea to start a business. Once upon time having a good idea was a major part of becoming a successful entrepreneur. Now anyone can have a good idea, and those ideas are competing globally and are very very rarely unique. The challenge today is not about can one have a good idea, but about how can one scale the idea into a sustainable business. This is an obvious but important distinction that is rarely mentioned in the press. Most entrepreneurs fail because they run out of cash, can’t commercialise their idea, get fed up with the pressure or fall out with their colleagues. The government and media are not providing any longterm support for the specific companies that have good ideas and are creating value but are struggling to move the business into something more sustainable.

Not all entrepreneurs are created equally

It is good that both the government and the media are encouraging people to start businesses and to give support to those who are. After all the UK needs to create business and jobs, if it is to break out of the debt nightmare that it is in and build a sustainable future for new generations.

But there is insufficient debate about which entrepreneurs should get the most support and why. After all there is a huge difference between becoming an entrepreneur with the aim of building and sustaining a business that employs a lot of people and starting a lifestyle business that allows you and one or two others to live comfortably as a self-employed business person.

The facts demonstrate that the real positive growth engines of the British economy are the fast growing mid-sized companies, who are creating lots of new jobs. From 2000-2013 the number of private sector businesses in the UK grew by 41%, however, 56% of these were in companies with no employees Source Department for Business, Innovation and Skills 2013. This means that the majority of new businesses have zero real growth potential. At the other end the companies with over 250 employees are hardly growing at all. So if we want to make entrepreneurial growth drive our overall economy, we have to be much more selective in how we incentivise the sector. This may not be a populist statement. Hence why politicians are reluctant to talk about it. But it’s true. We need to discriminate positively in favour of the best entrepreneurs who are creating jobs and building our economy.

So what would I stop doing?

For a start, I would not give out random National Insurance giveaways to all small companies, as the government recently did. I am a beneficiary of the recent £2000 NI giveaway, but actually this is too little, too widely spread.

Secondly I would look more closely at how I could deploy tax incentives to help small and medium sized businesses recruit and retain staff as they grow. For the start-ups, I would be encouraging, provide support and some fiscal stimulus, but I wouldn’t get so carried away with the hype.